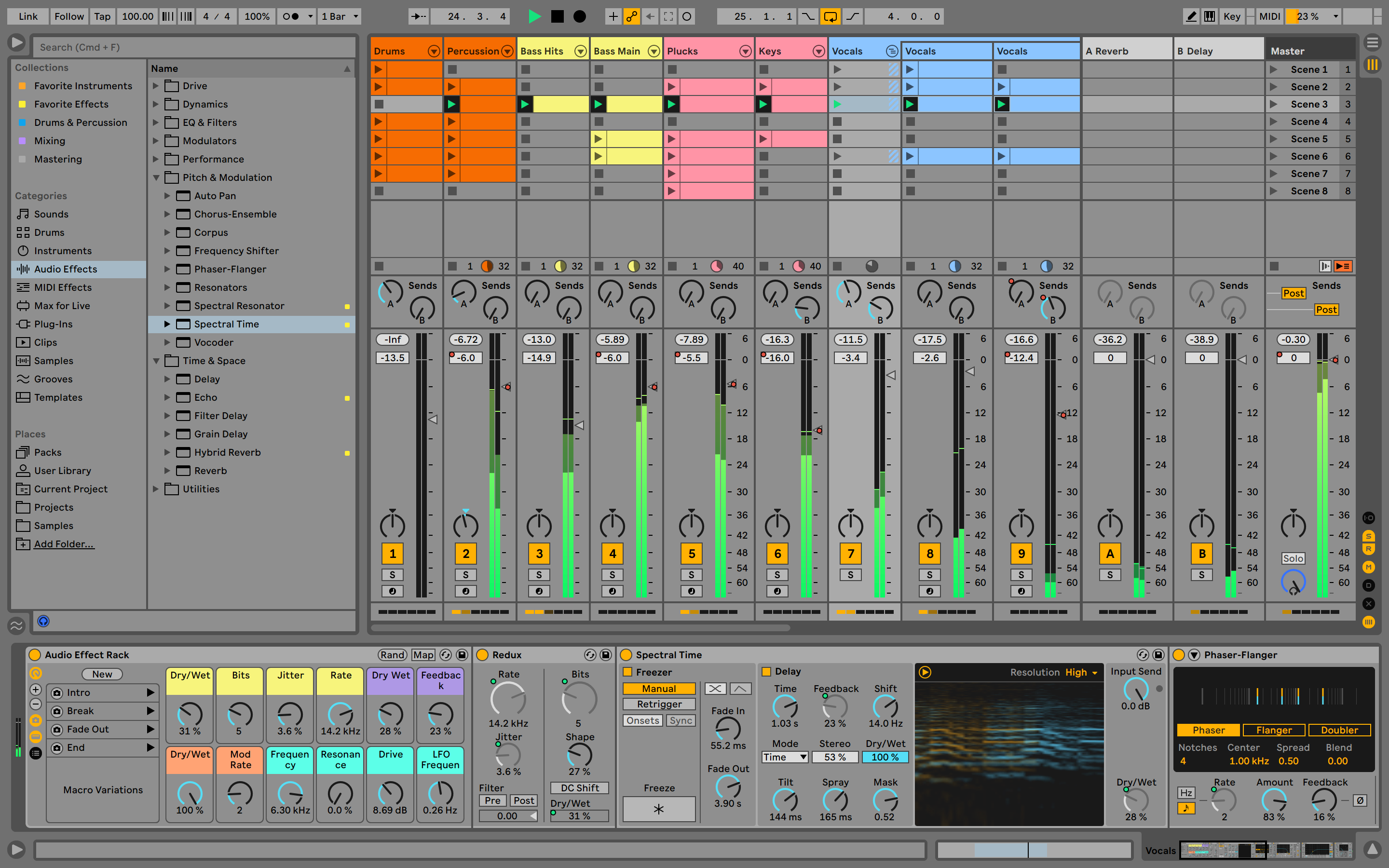 Ableton announced Live 11 in mid November and now it's finally here. The latest version of its incredibly popular DAW is out of beta and available to all.

That's in addition to lots of little interface tweaks and updates to Push support.

I've been using the beta since it was announced back in November and while I haven't put every new feature through its paces, I can say unequivocally that Live 11 is a solid upgrade from 10 and well worth your time. Just know that Live 11 is a bit more resource intensive that Live 10. And Live 10 was a lot more resource intensive than Live 9. So if your machine was already struggling after the last big update, you might want to wait until you can upgrade your hardware too. Here's a quick overview of what's new and the standout features (to me).

Lets start with arguably the marquee feature — MPE support. Ableton Live is one of the last major DAWs to add support for MIDI polyphonic expression. Bitwig has it, Logic has it, even Garage band has it. That means instruments that respond to MPE like Arturia's Pigments and sonicLAB's Fundamental can be that much more expressive when paired with the right controller, like the Sensel Morph. I mention those two in particular because they've been my go-to testbeds for exploring MPE. (They also couldn't be more different from a sonic standpoint.)

Ableton was smart enough to update a few of its stock instruments to support MPE too, like Wavetable and Sampler. You can find presets under “MPE Sounds” in the browser if you want to quickly dabble and explore. Ableton also included MPE Control and Expression Control devices, which you'll find under MIDI Effects. These let you decide how exactly you want various MPE functions to be used and map them quickly and easily. MPE Control also lets you take advantage of some of the tools available to you on an MPE controller, even if the instrument you're using doesn't support it. So, for example, you could fire up Ableton's Analog, tick a couple of boxes in MPE Control and slide your fingers around to trigger pitch bends and move the mod wheel. To be clear, you could always do this, but it's just a lot easier to get set up now.

This might sound minor, but I think one of the barriers to adoption of MPE controllers is getting them to play nice with non-MPE software. I don't want to spend an hour building custom mapping for every virtual instrument. I want to connect my Morph or Roli and just have it work as expected. This is a big step in that direction. Especially since, in my experience, your settings will need a lot of fine tuning to make the most of MPE and this really simplifies the process.

You can still take advantage of many of MPE's features even if you don't have a compatible controller by using Ableton's new expression editing tools. These allow you to dive in and manually tweak pitch bends, modulation and aftertouch on a per-note basis, just like you would any other automation lane. It's intuitive and simple, and might even convince a few more people to embrace MPE once they've gotten a taste of what it has to offer.

The other headlining feature, at least for me, is comping. This simply allows you to record multiple takes of the same section of a song without stopping and then combine the best parts easily. (I can already hear a bunch of purists screaming “that's cheating”, but they're wrong.) Now, I'm fully willing to admit my technical skills as a musician are mediocre at best and I can be a bit sloppy, so just being able to record eight takes in a row without stopping is huge.

Plus, this is a feature that many other DAWs have had for quite sometime, so Ableton is actually playing a bit of catch up here. And you can get creative with comping to create harsh glitchy juxtapositions or to just pullout the best parts of a jam.

Comping works with both audio and MIDI too, so whether you're trying to nail a vocal, a guitar solo or a complicated chord progression with a VST there's something to be taken advantage of. And it's incredibly easy to use. Basically each take is a “clip” (that will make sense to existing Ableton users) and they're grouped as take lanes under the main track in arrangement view. You then simply drag markers back and forth to indicate where you want to switch between your takes. And then, if you want, you can bring those clipped bits over to session view so you can trigger them separately to create new variations and combinations.

This is pretty straightforward, but it makes finetuning multi-tracked parts a breeze. You can link a bunch of tracks together and, whatever you do to one, is automatically applied to the others as well. This is great for cutting up and automating double-tracked rhythm guitar parts, or if you've got a melody being played on a piano and a synth at the same time, you just sync them up once, then start editing.

This also makes Ableton a lot more flexible if you're using it to edit say a podcast, or working with video and audio simultaneously. Once you've got everything synced up properly, you just link the tracks so that any changes you make don't cause the tracks to become misaligned.

And again, this works with MIDI as well as audio. In fact, you can link MIDI and audio tracks and edit them both at once. I'll sometimes use this as a way to pull out new musical ideas from a long jam. I'll record the MIDI and audio simultaneously, then go back and edit them as a linked track. The audio track gives me a preview of what the new part will sound like, and when I want to record the freshly pieced together melody without the harsh cuts, I have the MIDI ready to go.

There's a number of new sounds and devices in Live 11, but few have captured my attention quite like the Inspired by Nature pack. These instruments and effects use physical and natural models to determine sounds, modulation and sequencing. The most straightforward of these is Bouncy Notes which drops a virtual ball when you play a note and as it bounces, that note repeats. But you can draw walls and obstacles inside the “sequencer” (if you can call it that) that deflect the balls, or alter things like the launch angle and speed to create generative patterns. Similarly Vector Delay uses a gravitational model and orbiting spheres to determine the parameters of a multitap delay.

Then there's Emit, another bouncing ball / moving particle style device, but this one is a granular looper and synthesizer. It has so many controls and modulation options, that it can do everything from glitchy percussion loops, to atonal drones, to pretty plucked melodies, but all with a unique and slightly unpredictable bent. The 10,000-foot view is: you have particle emitters that fire either automatically as your track plays, or when triggered by MIDI. The particles then careen through the spectrogram of your sample. Honestly it's probably deep enough to get its own 1,000 word write up. Just be aware the Emit is quite resource intensive. So, I highly recommend you record your results as audio or at least freeze the track once you're done.

Vector FM and Vector Grain function almost exactly like Vector Delay, except they rely on FM and granular synthesis respectively. Then there's Tree Tone which is a strange sort of generative resonator instrument that's built for drones and gentle random melodies. 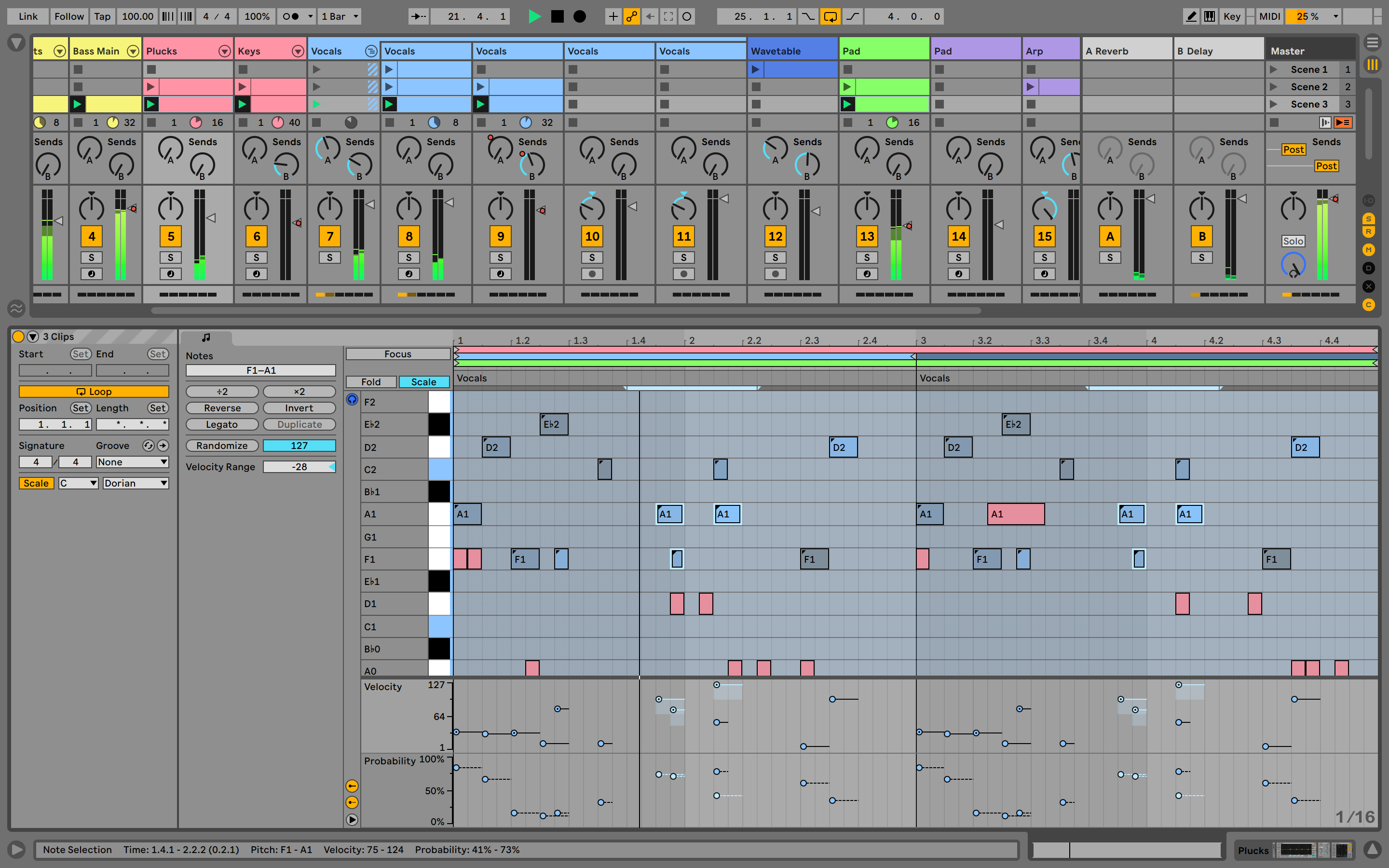 Being able to set a percent chance that a note will be triggered is becoming more or less de rigueur for hardware sequencers. Now, Ableton is properly integrating it into its clip controls. You can set probability on a per note basis, or randomize the probability across a bunch of notes in one shot. The actual interface for setting probability is straightforward and basically exactly like changing the velocity of a note. The only issue is it's easy to miss the probability controls if you're not looking for them — its one of the tiny buttons at the bottom the detail view of a clip. There's no text label.

In addition to randomizing the probability of notes. You can randomize the notes themselves, or values in a macro rack. You can also randomize the velocity of notes within set ranges, which is perfect for getting live feeling hi hat grooves going.

This is Ableton's first serious shot at integrating tools designed explicitly for unpredictability, and it did a great job at identifying some of the most immediately useful places to implement them.

Now, lets say you've used randomization on your macro settings and found something you like. You can now save it as a “variation” for easy recall. Variations are basically just macro presets that you can bounce between on demand. You can even map them to MIDI to allow you to switch between them live, which seems like their intended use. But, even though Macro Variations seem primarily like a performance tool, they can also be helpful for experimenting during the sound design phase or to create unique, jumpy rhythmic effects changes.

Now, I admittedly haven't spent too much time with the Variations features, but I've made extensive use of the redesigned Macro Rack which can now have anywhere from one to 16 controls. In the past you were stuck with eight macro knobs no matter what, which was unsightly if you only needed two, and frustrating if you wanted nine.

There's no way I could possibly cover everything new in Ableton Live 11 in detail without this turning into a literal book. So here's the TL;DR version of a few other standout features.

There are lots of other tweaks to the interface, improvements to the core sound library, and small additions like a dedicated LFO device. Ableton Live 11 is available now, starting at $99 for the Intro version. Intro supports comping, MPE and all of the new editing features, but it won't come with many of the new devices. Instead you'll have to step up to either the $449 Standard or $749 Suite editions to take advantage of many of the new instruments and effects. If you're already a Live 10 user, upgrade prices will vary depending on the current version you have, and what version you want to upgrade to. For instance, upgrading from Live 10 Suite to Live 11 Suite will cost you $229.

Regardless, if your computer can handle it, and you use Ableton regularly, the upgrade to Live 11 should be a no brainer.